Day 365. Well here we are. The last day of the year and the last of my 2014 Daily Create project. It's been an interesting year and I thought I'd use this last post to reflect on some of the lessons and moments from the past 365 days of creativity, and think about where to from here. 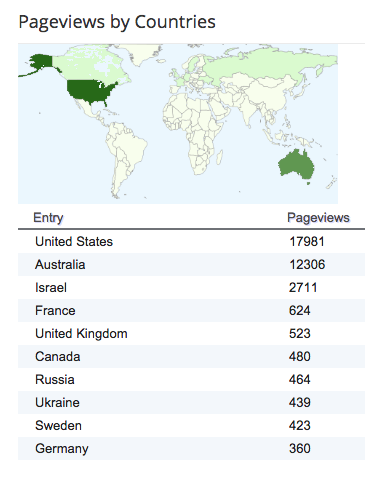 Firstly I really want to thank all those people who followed along with what I was doing here. When you do a project like this, even when you blog about it and share it online, there is a very real probability that you do it in a vacuum and that no one will even notice you're doing it. And yet, I've been astonished and surprised at just how much feedback I've received from people about this project. From comments left on posts from individuals, to the unexpected site statistics created by unknown websurfers (the site had over 40,000 page views during the year) to the people that came up to me at conferences and told me how much they enjoyed it, thank you. I didn't do this project for you, but I am truly humbled that others may have received some inspiration or value from it. It means a lot.

Secondly, it's been personally rewarding to have forced myself to try and come up with a different project every day for a year. I've discovered so many new tools, apps and ideas just because I knew I had to. That's not to say that every daily create has been a piece of brilliant creativity. Many have been rubbish, I know that. Many have just been done because I promised myself Id do SOMETHING, and at 5 minutes to midnight I'd find some app that I hadn't used much before and bang out something just for the sake of it.

But there is a flip side to that too. I've done some things that I've been incredibly happy with, that I've surprised myself at what I managed to create.  I think there have been some amazing pieces that I know I would never have come up with without the daily discipline I set for myself of coming up with something every day.  That's perhaps been the most surprising thing. I missed a few days here and there (only 17 in total). I wish I didn't miss any days at all, but on the whole, I've surprised myself with what I did do.

Creativity is not a mystical gift that some people have and others don't. It's something you can cultivate. It's a numbers game. You make lots of stuff and some of it will be good. Simple as that. You can not only learn to be creative, you can force yourself to be creative.

I discovered - again - that curiosity + action = creativity. Most of us do have creative ideas, usually triggered by some level of curiosity or wonder, but we too often don't act on that curiosity. We allow the moments of wonder or curiosity or humour or insight to just pass by without taking that moment and making something out of it. Living a creative life really is that simple. Don't wait for inspiration. Just make stuff. Some of it will be shit, but some of of it will be amazing.

So tomorrow is the start of a new year. What's in store for 2015? Well, I'm not going to just continue this project. A full year of doing something as a daily creative act has been, at times, quite exhausting. There have been days when it's been a real struggle to come up with something, or what I did come up with was not very inspiring to me. At times this project has actually caused me to seriously doubt my creative ability when I simply could not think of anything interesting. Mind you, I'm not going to beat myself up about it, as I look back and see a lot of other things I am really happy with.

But there is certainly an "opportunity cost" for this type of project. I did notice that while I may have produced a lot of stuff here on this site each day, it also meant there were other things that I was not doing elsewhere. I certainly blogged on my main blog a lot less than I used to. I produced less of the bigger, more substantial projects that I've done over the past few years because my mental and creative energy was being directly at these smaller daily projects. I think that I produced a lot of stuff that had seeds of good ideas in them but were mediocre in themselves because they were essentially "throw away" ideas. A lot of great stuff has come from doing the Daily Create, but at a significant cost to other things I might have been doing.

So in 2015 I am not going to do a "daily thing" project. I've learned a lot from this one but now I want to do some other things and hopefully apply some of the ideas I've learned here.

I want to go back and spend more time blogging on my main blog at www.chrisbetcher.com. In a world obsessed with sound bites and Twitter length snippets, I still enjoy long-form blogging. I don't really care if anyone reads it, I just enjoy writing it, as it helps me think.

I also want to read a lot more. I read many blog posts, social media streams and so on now, but I want to make more effort to read more books. They represent the deep thinking of others and I want to dig into more of that.

There is lots going on in my life next year. I have made some changes to my role at school, my independent work with EdTechTeam is gathering more and more momentum, I'm getting married to Linda in May, and I doing more travel than ever (and loving it). Life is wonderful.

I'll take many lessons away from this Daily Create project. Thanks for sharing the journey with me.
Posted by Chris Betcher at 08:00 No comments:

Day 364. While browsing through the Chrome Webstore tonight I found this fantastic web app called StoryBird. This is the forst time I've played with it and I just made a fairly silly little story just to see what can be done with it, but it looks really great. I can see lots of uses for this with my younger students, as they make books and tell stories. I like that it starts with the visuals and let's you create the words to go along with it.  They also do special educator accounts too, so I'm excited to see what that offers.

Posted by Chris Betcher at 01:49 No comments:

Day 363. I met this cranky little fellow in the Sacred Monkey Forest in Ubud while we were in Bali a few weeks ago. I had my GoPro camera on a GoPole and tried to get a closeup shot but he wasn't so keen on the idea. Maybe I should have talked with his manager first. This clip was in the video I posted a few days ago, but I used a free tool called Gifyoutube to take those few frames out of the video and loop them as a GIF file. Hours of fun!

Posted by Chris Betcher at 11:26 No comments:

Day 362. We enjoyed a traditional German Black Forest Stollen cake at Christmas. It's like a cake and bread together. Anyway, I was slicing up a few pieces of stollen this morning and took a photo of it using Adobe Shape which turns it into a vector image, then imported it into Adobe Photoshop Touch to add some brushed colour and an extra layer, blended together with a lighten blend mode. 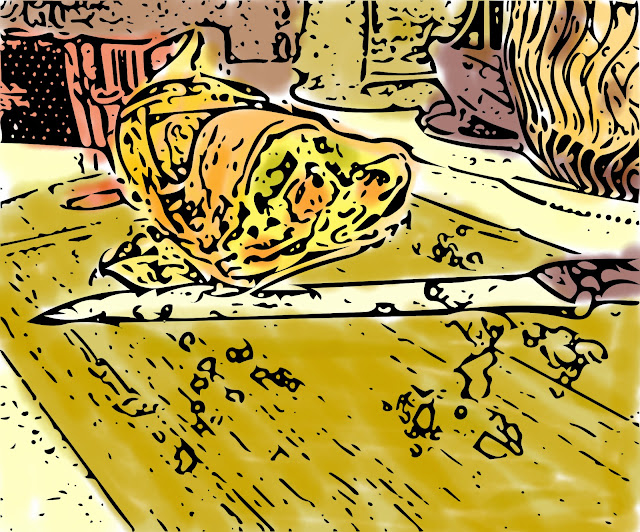 Posted by Chris Betcher at 11:01 No comments:

Day 360. I thought I'd take yesterday's image, which was already quite manipulated, and push it even further. So I passed it through a few more apps but mainly Repix, which has some very interesting effects like bokeh, scratches, smudges and drips. In the end the original image looks even more different. 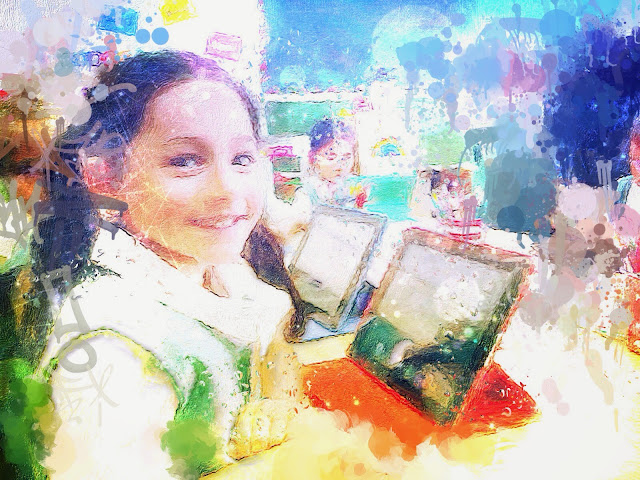 Posted by Chris Betcher at 00:34 No comments:

Day 359. As the year draws to a close and there are just a few more daily creates to go, here is a hand drawn Santa for you, made using Paper by 53, and text added with Adobe Photoshop Touch. Hope your Christmas - or whatever you celebrate at this time of year - was great. Ho ho ho. 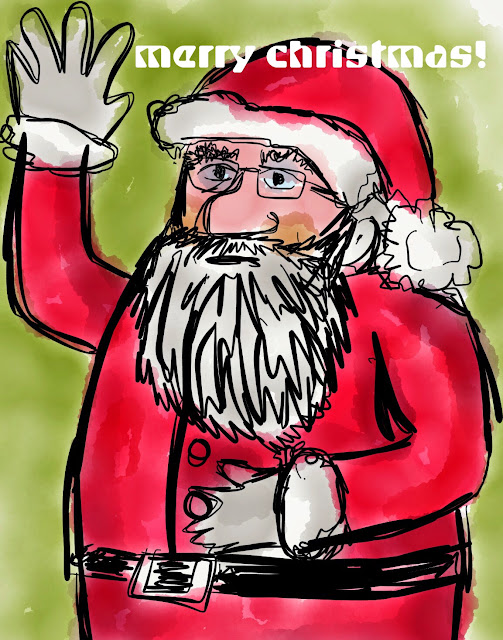 Posted by Chris Betcher at 00:10 No comments:

Day 358. I had a play with a new app called Brushstroke which can apply brushstroke effects, canvas effects, image manipulation, etc, to turn a photo into a faux artwork. It's interesting, and adds to a long line of apps like this. 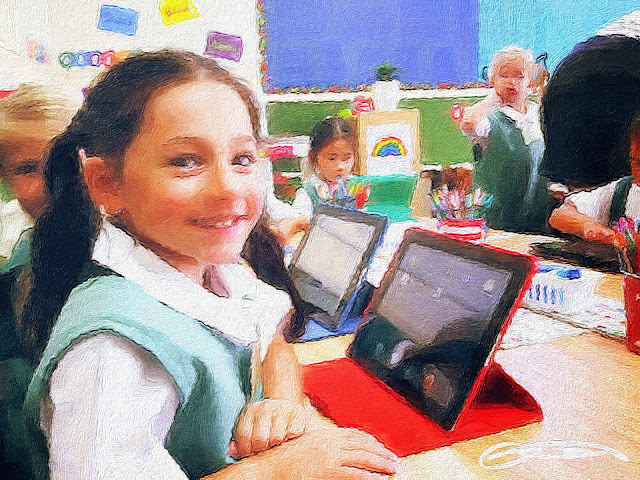 Posted by Chris Betcher at 23:56 No comments:

Get the Daily Create via email

Get the Daily Create via RSS